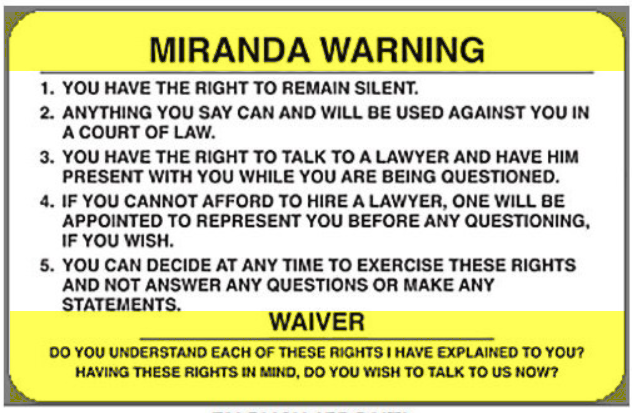 Miranda Update #7 - Handcuffing and Miranda - "From the Classroom"

“Its ‘402’ time, officer” - “Who Wins, You or Defense counsel”? Note: 402(b) E.C. – A pre-trial court hearing to determine the admissibility of an admission or confession.

This is the seventh in a series of mini-articles covering basic Miranda and Confession Law. This review is equally applicable to detectives and those generalists who are assigned to investigate their own cases. This update is particularly applicable to patrol officers and deputies.

The question for this article is:

A daytime display case “smash” burglary occurs at an electronics store. Fifteen minutes later, one of the persons matching the description of one of the suspects is detained. He is frisked and handcuffed, but there is no “plain touch” of the fruits of the crime. The suspect is asked about the whereabouts of the property. He replies, “Ha, Ha - Fifth Street Boys rule” (a local street gang). “Our ladies are using it now”! No Miranda admonition was given.

Defense counsel wants the statement suppressed because handcuffing equals custody and no Miranda waiver was secured before questioning. The statement should be?

The statement given while the suspect was handcuffed is arguably inadmissible. Handcuffing, even for officer safety purposes, triggers “constructive custody” for the purposes of Miranda, “Constructive custody” involves handcuffing during a restrained detention, a search a warrant service, a probation or parole search, or when a suspect “secured” in the rear of a police car pending investigation. Although the words “You are Under Arrest” aren’t spoken, a person’s freedom of movement is restrained equivalent to being under arrest for Miranda purposes. Examples:

Handcuffing conveys a message because it is a distinguishing feature of a formal arrest (Dunaway v. New York (1979) 442 US 200). Handcuffing a detained aggravated assault suspect who had struck the victim with a bottle outside a Laguna Beach brewery constituted “constructive custody”. “A reasonable person would conclude he had been placed in custody when officers immediately handcuffed him after arriving on the scene and asked questions” (Peo. v. Pilster (2006)138 Cal. App. 4th 1395).

Deputies executed a drug search warrant. While handcuffed, a cotenant was asked where the "drug stash" was located. She admitted the drugs were inside "reptile occupied" cages in her bedroom. Defendant was in constructive custody. Because no Miranda waiver was obtained, her statement was inadmissible to show "knowledge and control" over the contraband (Peo. v. Berry (1990) 224 Cal. App. 3d 162); Defendant was detained "felony stop style" by four deputies, supported by a police helicopter, and withdrawn from his vehicle at gunpoint.  He responded to a question about the location of stolen property. The restraint was similar to that involving a formal arrest and responses to questions about discarded burglary evidence were inadmissible (Peo. v. Taylor (1986) 178 Cal. App. 3d 222).

Twenty-three FBI agents made a forcible entry at gunpoint and served a search warrant for child pornography. Defendant was ordered to get dressed, directed downstairs, “guarded at all times”, and advised to accompany agents to a vehicle parked behind the house. He was told that he was not under arrest. Defendant was interviewed inside the car for three hours. Agents did not seek a Miranda waiver. Custody attaches when a person would reasonably believe that his or her freedom is restricted to the degree associated with a formal arrest. Here, 23 agents “inundated” the house, awakened the defendant at gunpoint, controlled his movements, and he was “bracketed” by two agents while being questioned for lengthy period of time. Merely telling the defendant that he was not under arrest did not counterbalance the custodial circumstances present (U.S. v. Colonna (2007) 511 F 3d 431);

Seven ATF&E agents and Tulsa, Oklahoma Police officers served a search warrant for cocaine sales. They forcibly entered the house, handcuffed the defendant, and detained her for 30 minutes while a search was conducted. Three officers then escorted the defendant into a back bedroom, closed the door, removed the handcuffs, and asked her if she was willing to cooperate with the investigation. Defendant responded by making incriminating statements. No Miranda warning was given. The manner of investigation hardly qualified as a “traditional comfortable environment”. “Seven police officers abruptly roused Revels from her bedroom after forcibly entering her home”. “Revels was immediately detained, restrained in handcuffs, and placed face down on the floor”. Officers separated her from her children, moved her into a back room, and confronted her with the drugs that they had discovered. “Revels would have reasonably felt compelled to cooperate with the police” (U.S. v. Revels (2007) 510 F 3d 1269).

A robbery suspect was handcuffed and detained in the back of a patrol unit. An officer asked the defendant if he owned the suspect vehicle. Defendant admitted that he owned the car and consented to a search. Robbery evidence was located. Defendant's response was admissible to establish authority for a consent search, however his statements could not be used to show "knowledge and control" over the contraband recovered in the car. His freedom of movement had been significantly restrained and the question posed was likely to produce an incriminating response (U.S. v. Henley (1993) 984 F. 2d 1040).

Constructive custody can be attenuated or “cooled off”. Examples:

* During a restrained detention an officer tells the detainee that he/she is not under arrest and handcuffs are only being applied for officer and scene safety purposes. After safety concerns have been resolved (if the circumstances can in fact be resolved), the officer removes handcuffs, reminds the detainee that he/she is still not under arrest, officers are trying to determine “what happened, and the person is free not to answer questions. Attenuation could permit further questioning without a Miranda warning because the element of “constructive custody” has been mitigated(U.S. v. Salvo (1998) 133 F 3d 94).

* A citizen identified the defendant after he threw rocks at a passing bus. A Santa Ana Police officer went to a co-defendant’s home where the defendant was present. Defendant was frisked, told that he was not under arrest, and that he didn’t have to speak with officers. He was handcuffed for officer safety and placed in the back of a police car for five minutes while the other codefendant was questioned. The officer then withdrew the defendant from the car, removed the handcuffs, reminded the defendant that he wasn’t under arrest, and asked questions about the incident. No Miranda warning was given. “Focused suspicion” is not the same as custody. Defendant was never told that he was under arrest, he was advised he didn’t have to answer questions, was only briefly restrained for safety purposes, and handcuffs were removed at the time of questioning (In re: Joseph R. (1998) 65 Cal. App. 4th 957),

Defendant worked as a janitor at a Sacramento County high school. He reported that he had found an 18-year-old student’s body. The victim died due to blunt force trauma to the head (consistent with being struck with a crowbar) and was stabbed in the back three times. A deputy asked the defendant to accompany him to a patrol car, told him that he was a witness in the investigation, and that he was going to be interviewed later. Defendant agreed to be seated in the back of a patrol car with the door shut. He was not searched or handcuffed. Twenty minutes later, the deputy returned and let the defendant out of the car. A 20-minute interview ensued focusing on inconsistencies between the defendant’s statements and crime scene conditions. Incriminating statements were obtained. No Miranda admonition was given. Any indicia of custody “was undone” when the defendant was released from the back of the patrol car. “Even if we were to conclude defendant had been in custody when he was detained in the patrol car, it does not necessarily follow that he remained in custody when he was released from the vehicle before he was interviewed” (Peo. v. Thomas (2011) 51 Cal. 4th 449).

Detectives sought to question a parolee about a double homicide. When he reported to the parole office, his parole agent handcuffed him and called detectives. When detectives arrived, they removed the handcuffs and apologized for the restraint. Defendant was told he was not under arrest and was free to leave. He agreed to go to the police station for questioning, rode with officers in an unmarked car, and was not handcuffed. At the station, he was offered coffee and the use of the restroom before interview. Defendant made incriminating statements. After interview, he was given a ride back to the parole office. A reasonable person in the defendant’s position would not have believed his freedom was restricted to the degree associated with a formal arrest. The act of temporary handcuffing was attenuated by other non-custodial factors (Peo. v. Holloway (2004) 33 Cal. 4th 96).

So factors to consider in the “attenuation process”:

By the way, I mentioned the possibility of “plain touching” stolen property or contraband during a frisk. Most “plain touch” cases deal with drugs and paraphernalia, but here is an interesting case where stolen property was “immediately and readily apparent”:

Vallejo Police officers were watching a parked Chevrolet Trailblazer that had been carjacked in Sacramento by three persons the previous day. They observed the defendant and two other males, all of whom matched the basic suspect descriptions, leave a residence and look into the Trailblazer at least six times over a 2-1/2-hour period. Officers approached the suspects and asked them if they knew anything about the vehicle or had any keys in their possession. Defendant denied any knowledge of the vehicle. A police dog sniffed the floorboards and driver’s seat of the Trailblazer and was instructed to track. The dog led its handler to the three suspects who were seated on the curb across the street. An officer frisked the defendant and felt what he believed were keys in his pants pocket. The officer removed the keys and noted they bore a Chevrolet logo. He pressed a button on the key fob and the Trailblazer’s locking system, horn, and lights were activated. Defendant was arrested and subsequently confessed to the carjacking. There was probable cause to arrest because the defendant matched the physical description of one of the carjackers, he was repeatedly seen inspecting the stolen vehicle in a suspicious manner, the dog had tracked to him from the stolen vehicle, and during the frisk the officer “plain touched” keys after the defendant denied possessing any keys (In re: Lennies H. (2005) 126 Ca. App. 4th 1232).