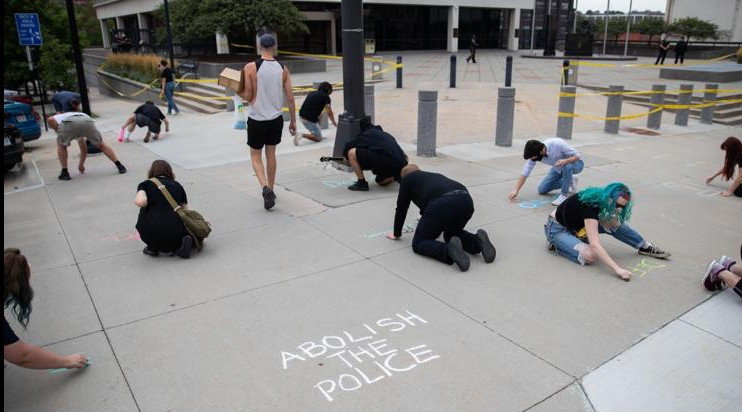 The First Amendment Freedom of Expression and Retaliatory Arrest

The First Amendment forbids government officials from retaliating against individuals for “speaking out” (i.e., exercising their First Amendment freedom of speech rights), whether or not the persons so speaking are critical of the government.  While the existence of probable cause to arrest precludes, as a general rule, a civil suit based upon an arrest in retaliation for speaking out, an exception to this rule applies where the plaintiff’s violation is one not normally and/or not uniformly enforced.

Plaintiffs Brian Ballentine, Catalino Dazo, and Kelly Patterson, were all members of a local activist group called the “Sunset Activist Collective” which, in turn, was associated with an organization called “CopBlock.”  As the name implies, they tended to be critical of the police.  The Plaintiffs in this case liked to demonstrate their dissatisfaction with the police through the use of chalk, writing anti-police messages on the sidewalks of Las Vegas.  In Nevada, the use of chalk on a city’s sidewalks is illegal. (Nev. Rev. Stat. § 206.330; “plac(ing) graffiti on or otherwise defac(ing) the public or private property, real or personal, of another, without the permission of the owner.”)  On June 8, 2013, Plaintiffs were chalking the sidewalk in front of the Las Vegas Metro Police Department’s headquarters, writing messages (spanning some 320 square feet) that were critical of the police.

Told by a Metro Police supervisor that their chalking activities were illegal—the officer suggesting instead that they use signs like everyone else—they were warned that they would be cited if they didn’t clean up their artwork.  Plaintiffs refused to clean it up their artwork.  So, upon confirming with a state court judge, a deputy district attorney, and an internal affairs detective that sidewalk chalking is a crime under Nevada’s graffiti statute, they were cited.  The cost to the City of cleaning up the Plaintiffs’ artwork was not indicated.  A follow up investigation by Detective Tucker (the listed civil defendant in the eventual lawsuit), researching the Plaintiffs’ social media accounts and tracking their activities, revealed to the detective the Plaintiffs’ association with the above anti-police organizations, as well as the nature of the Plaintiffs’ repeated chalking episodes.

On July 13, 2013 (over a month after the above incident), Plaintiffs Ballentine and Patterson again chalked messages critical of the Metro Police Department on the sidewalks outside of Metro’s headquarters.  This message (spanning 240 square feet) cost the City $300 to clean up.  Five days later (July 18), Plaintiffs appeared in court on the citations issued to them on July 8.  The citations “were not prosecuted” (i.e., dismissed?).  Showing their gratitude (or lack thereof), Plaintiffs left the courtroom and immediately proceeded to chalk up the sidewalks in front of the courthouse.  This time they illustrated their displeasure with the Metro Police Department with such profanities as “F__k Pigs,” and “F__k the Cops.”  This chalking spanned some 1,000 square feet and cost the City approximately $1,250 to clean up.  Detective Tucker witnessed this latest chalking episode.  Confronting the Plaintiffs, the detective’s request to clean up the chalk was ignored.  It was also noted by the Court that other individuals, including children, were not stopped from also chalking the sidewalks that day (a fact that later becomes significant).

A week later (July 26), Detective Trucker applied for arrest warrants for Plaintiffs, alleging violations of Nevada’s chalking law on July 13 (at the Metro Police Department ) and 18 (at the courthouse).  A criminal complaint—referring to the graffiti as “derogatory and profane”—was filed against the Plaintiffs on August 9th, alleging a conspiracy to commit the crime of “placing graffiti,” or otherwise “defacing property.”  Plaintiffs Ballentine and Patterson were arrested at a subsequent protest.  The District Attorney, however, ultimately dropped all charges after concluding that the “prosecutions were not a good use of limited resources.”  Plaintiffs responded by suing all the involved officers and the Metro Police Department itself in federal court, asserting claims pursuant to 42 U.S.C. § 1983 and Nevada law.

The district court granted the civil defendants’ motion for summary judgment on all claims except one; i.e., the Plaintiffs’ claim that Detective Tucker violated their First Amendment rights by arresting them in retaliation for chalking anti-police messages on the city’s sidewalks.  Detective Tucker appealed.  After a trip up and down the appellate court ladder, with the case eventually being returned to the federal district (trial) court, Detective Tucker’s motion for summary judgment was eventually granted.  The district court’s stated reason for dismissing the lawsuit was that even though the Plaintiffs had the right to be free from retaliatory arrests, this legal concept was not yet clearly established in the law when Detective Tucker issued declarations for the Plaintiffs’ arrests, entitling him to qualified immunity. Plaintiffs timely appealed.